Dominguita, Pancho, and Stef are back in this Cuban American early chapter series.

This time, a quinceañera may be at risk unless the the imaginative friends can take inspiration from another classic novel. Can you guess which one? 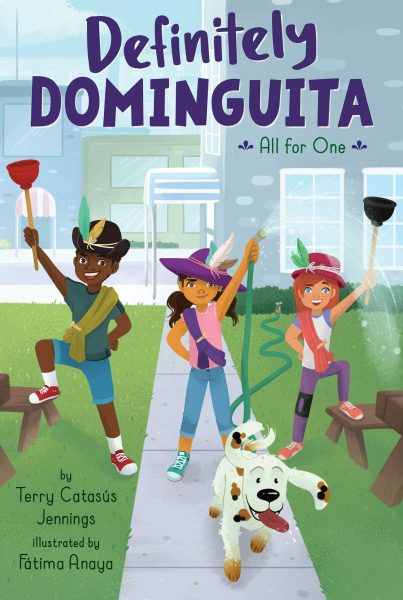 On September 11, 1961, Terry Catasús Jennings landed in the United States after a short flight from Cuba. On September 12th, she was enrolled in seventh grade in an American school. Her family, including her father who had been jailed during the Bay of Pigs invasion, was now in a free country. The only catch for twelve-year-old Terry was that she could count in English and recite the days of the week and the months of the year, but not much more. Often being the only Cuban in her school—even through college—Terry knows what it’s like to be the new kid on the block. She is delighted to have the opportunity, with Definitely Dominguita, to portray a child of immigrants who is normal—no different than her peers—other than she loves the classics (like Jennings did as a child) and thinks Cuban food rules.

…
CREDIT: Photos from Lou Jennings, book covers from Simon & Schuster, family photo of Terry C. Jennings as a child/Collage by The Washington Post