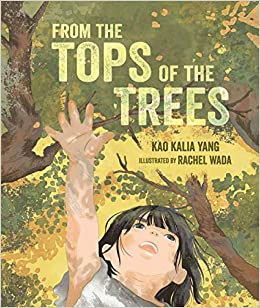 Young Kalia has never known life beyond the fences of the Ban Vinai Refugee Camp. The Thai camp holds many thousands of Hmong families who fled in the aftermath of the little-known Secret War in Laos that was waged during America’s Vietnam War. For Kalia and her cousins, life isn’t always easy, but they still find ways to play, racing with chickens and riding a beloved pet dog.

Just four years old, Kalia is still figuring out her place in the world. When she asks what is beyond the fence, at first her father has no answers for her. But on the following day, he leads her to the tallest tree in the camp and, secure in her father’s arms, Kalia sees the spread of a world beyond.

Kao Kalia Yang’s sensitive prose and Rachel Wada’s evocative illustrations bring to life this tender true story of the love between a father and a daughter.