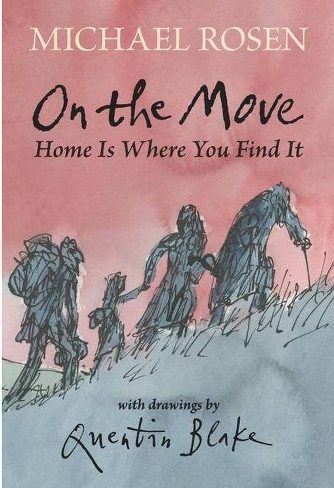 “A graceful tapestry weaving together personal and global perspectives and a heart-rending memoir of human endurance.”
—Kirkus Reviews  (Starred Review)

Some of Michael Rosen’s relatives were lost before he was born, in the Holocaust. First, he wondered about them. And he wrote poems. Next, he searched for their stories. And he wrote poems. Then he found their stories. And he wrote poems. Now, in a companion book to The Missing: The True Story of My Family in World War II, Michael Rosen has brought together forty-nine of his most powerful poems, exploring the themes of migration and displacement through the lens of his childhood in the shadow of World War II, the lives of his relatives during that war, and migration, refugees, and displacement today and tomorrow, here, there, and everywhere. Throughout, atmospheric watercolors from master illustrator Quentin Blake evoke the hardship, exhaustion, isolation, and companionship of being on the move. At once intimate and universal, On the Move probes the power of art to adapt, bear witness, and heal.