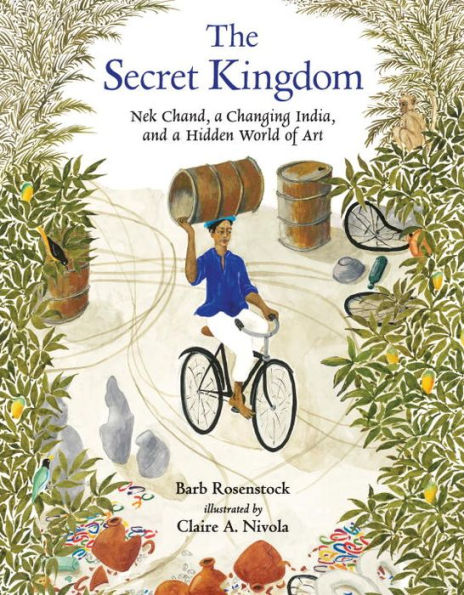 “Rosenstock’s gratifying story conveys how art has the capacity to revitalize and restore.” –Publishers Weekly

After the partition of India in 1947, Nek Chand Saini settled in the city of Chandigarh, with nothing but stories brought from his homeland. Dismayed at his stark new surroundings, Nek began collecting river rocks, broken glass, and cracked water pots found on the roadside. He cleared a section of jungle and for seven years he stockpiled odds and ends. They were castoffs and rubbish to everyone else, but to Nek, they were treasures. He began to build a labyrinth of curving paths, mosaics, and repeating patterns: his very own tribute to the winding village of his youth, a hidden land of stories. Nek kept his kingdom secret for fifteen years, until a government crew stumbled upon it and sought to destroy it. But local fans agreed in awe: the Rock Garden had to be protected. Author Barb Rosenstock introduces readers to the outsider artist’s stunning creation, while Claire A. Nivola’s illustrations bring to life the land’s natural beauty and the surreal world Nek coaxed from his wild landscape.