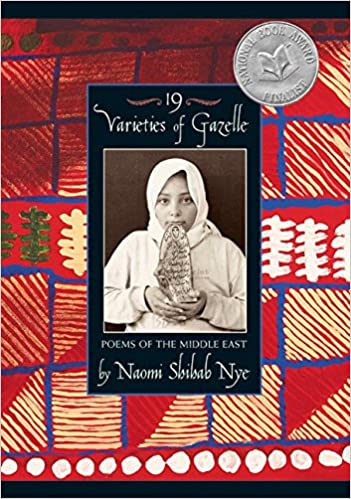 “…These poems show what life is like for Arab Americans who are tied to two very different worlds. Caught painfully between these two worlds, they feel the horror and sadness over the terrorist acts yet are aware of the many innocent Arabs who have become victims as well…This collection can help teens understand a different point of view and a culture with which most teens are not familiar” –VOYA

“Tell me how to live so many lives at once …” Fowzi, who beats everyone at dominoes; Ibtisam, who wanted to be a doctor; Abu Mahmoud, who knows every eggplant and peach in his West Bank garden; mysterious Uncle Mohammed, who moved to the mountain; a girl in a red sweater dangling a book bag; children in velvet dresses who haunt the candy bowl at the party; Baba Kamalyari, age 71; Mr. Dajani and his swans; Sitti Khadra, who never lost her peace inside. Maybe they have something to tell us. Naomi Shihab Nye has been writing about being Arab American, about Jerusalem, about the West Bank, about family all her life. These new and collected poems of the Middle East–sixty in all– appear together here for the first time.