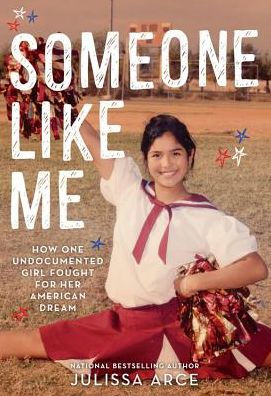 “A beautiful tale of love, perseverance, and survival. Arce gives readers a poignant and heart-wrenching window into the pain and anxiety endured by immigrant families separated by the border in a time when we desperately need it. She’s an inspiration to all Americans.” –Sara Saedi, author of Americanized: Rebel Without a Green Card

Born in the picturesque town of Taxco, Mexico, Julissa Arce was left behind for months at a time with her two sisters, a nanny, and her grandma while her parents worked tirelessly in America in hopes of building a home and providing a better life for their children. That is, until her parents brought Julissa to Texas to live with them. From then on, Julissa secretly lived as an undocumented immigrant, went on to become a scholarship winner and an honors college graduate, and climbed the ladder to become a vice president at Goldman Sachs. This moving, at times heartbreaking, but always inspiring story will show young readers that anything is possible. Julissa’s story provides a deep look into the little-understood world of a new generation of undocumented immigrants in the United States today–kids who live next door, sit next to you in class, or may even be one of your best friends.