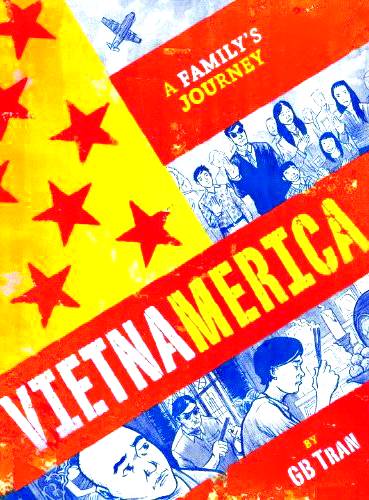 “If you have ever felt a connection to the immigrant experience, if you are born of a generation that benefited from the bruises and blood of the one that came before, then this memoir will resonate as literature rarely does. And if this is the first time you’ve looked deeply at the story of the Vietnamese diaspora, then know that this is the sort of grand epic that begins to make sense only when told through the words of people who lived it.” –Racebending

GB Tran is a young Vietnamese American artist who grew up distant from (and largely indifferent to) his family’s history. Born and raised in South Carolina as a son of immigrants, he knew that his parents had fled Vietnam during the fall of Saigon. But even as they struggled to adapt to life in America, they preferred to forget the past and to focus on their children’s future. It was only in his late twenties that GB began to learn their extraordinary story. When his last surviving grandparents die within months of each other, GB visits Vietnam for the first time and begins to learn the tragic history of his family, and of the homeland they left behind. In this family saga played out in the shadow of history, GB uncovers the root of his father’s remoteness and why his mother had remained in an often fractious marriage; why his grandfather had abandoned his own family to fight for the Viet Cong; why his grandmother had had an affair with a French soldier. GB learns that his parents had taken harrowing flight from Saigon during the final hours of the war not because they thought America was better but because they were afraid of what would happen if they stayed. They entered America a foreign land they couldn’t even imagine here family connections dissolved and shared history was lost within a span of a single generation. In telling his family’s story, GB finds his own place in this saga of hardship and heroism. Vietnamerica is a visually stunning portrait of survival, escape, and reinventionand of the gift of the American immigrants’ dream, passed on to their children. Vietnamerica is an unforgettable story of family revelation and reconnection and a new graphic-memoir classic.