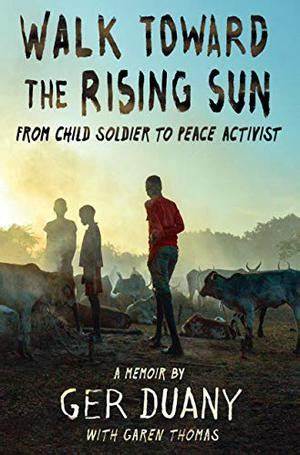 An intimate look from a refugee’s perspective at the toll war takes.
–Kirkus Reviews

The amazing autobiography of a young Sudanese boy who went from a child soldier to an international peace activist, a struggling refugee to a Hollywood actor.

Ger Duany’s days of playing with his brothers and sisters on the banks of the Nile were cut short when, at the age of six, his village was attacked by the North Sudanese military. Thus began a long journey into the unknown: never staying in one place too long for fear of the enemy, repeatedly experiencing the loss of loved ones, braving dangerous conditions to gain an education, taking up arms alongside his father and brothers, and eventually boarding a flight without his family to seek refuge in a foreign country.

Arriving in Des Moines, Iowa in the 90s to live with previously unknown relatives, Ger worked tirelessly to adjust to a new life that, while easier in some ways, came with its own challenges. He battled the effects of PTSD and endured a new kind of racism in America, yet he also found solace in basketball, in friendships and relationships, and eventually in acting and activism. While Ger found and built communities in each place he lived in the US–Des Moines, LA, NYC–he never lost sight of his home and his family still in Sudan. Ger’s story is one marked not only by great resilience in the face of constant change but also by an enduring sense of compassion and moral duty.