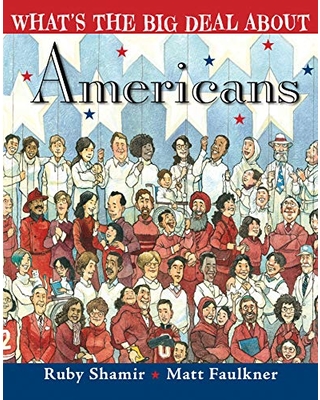 What is at the heart of Americans’ collective identity and strength? Their far-flung roots, Shamir says in this latest installment of the civic-minded What’s the Big Deal series: “at some point, all of us were new to this land.” Those backstories–difficult, happy, and tragic–have led to a “rainbow assortment of people” who represent an “array of languages and backgrounds, talents and interests, hopes and beliefs” and who possess an inextinguishable inventive spirit.
—Publishers Weekly

From Native American traditions to immigrant inventions, from diversity to democracy, from ice cream cones to apple pie, this fun and fact-filled book–now in chapter book format!–celebrates the melting pot and mosaic that is America.

Did you know that the inventor of American cheese actually came from Canada? Or that founding father Benjamin Franklin was inspired to create a democratic society by a confederacy of Native American tribes who came together to stop their constant warring? How about that both “God Bless America” and “White Christmas” were written by Irving Berlin, a Russian Jew who fled to the U.S. because of persecution back home?

People have come to America from many countries, in many ways, for many reasons. Americans have many different beliefs, different languages, and different traditions. But even with all of these differences, America comes together with the understanding that our country and government is “of the people, by the people, and for the people.” And there’s nothing more American than that.