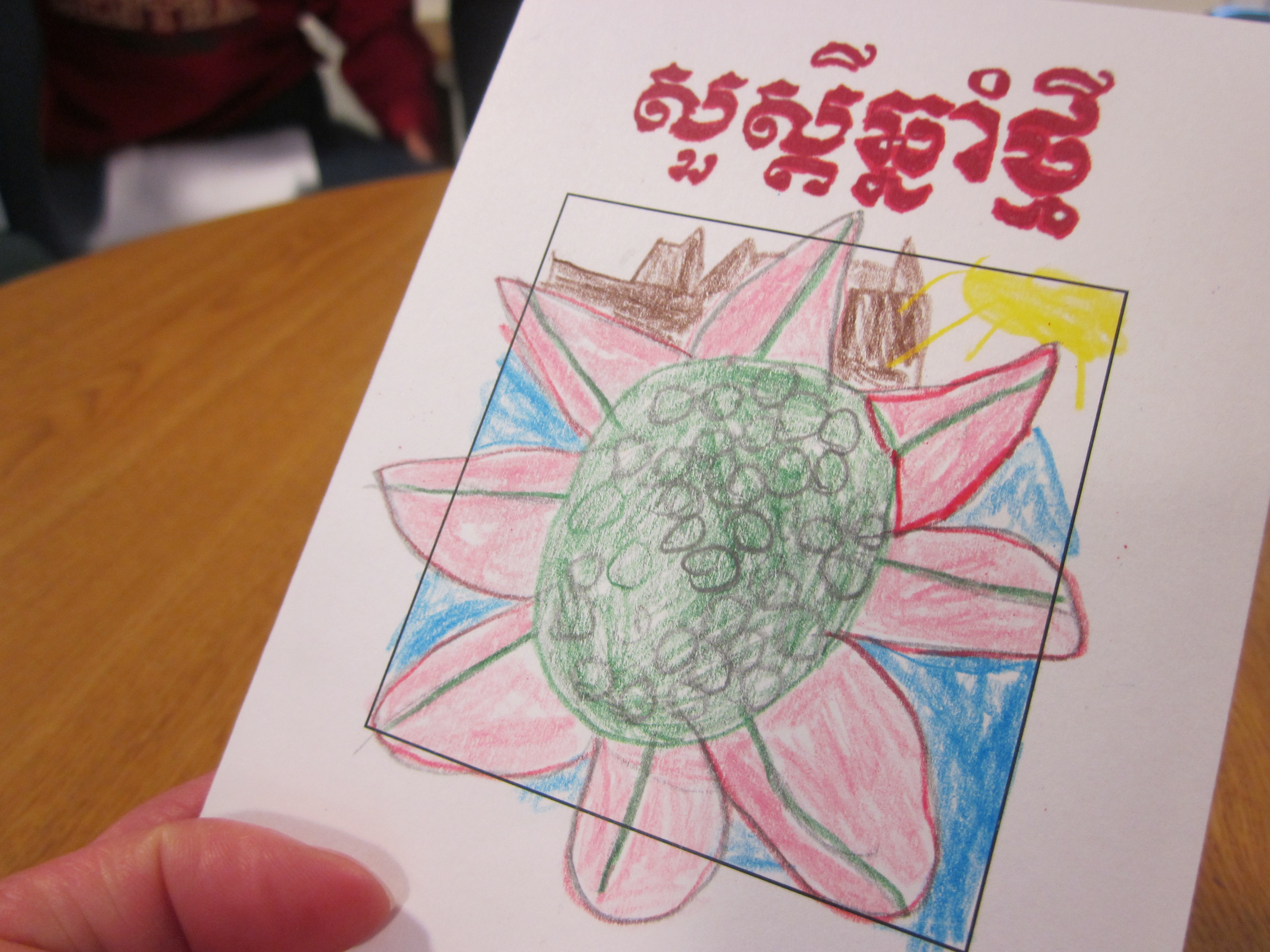 This weekend, Cambodians Americans in Maine and Cambodians around the world, celebrate the New Year. In celebration of that holiday, third and forth graders from Canal School in Westbrook, Maine joined Peaks Island, Maine author/illustrator Anne Sibley O’Brien to listen to a reading from O’Brien’s book about Cambodians Americans, A Path of Stars. Together they created greeting cards with “Happy New Year” written in Khmer, the language of Cambodia, and hand-drawn lotus blossoms for the Buddhist temple in Buxton, Maine.

The students listened raptly to the story of young Dara and her grandmother, Lok Yeay. Lok Yeay shares memories with Dara stories of her happy life growing up in Cambodia when her family told each other stories under the stars that “glowed like fireflies.” Sometimes, though, Lok Yeay is lost to sadness and Dara hears how Lok Yeay lost everyone but her brother in the war and how she fled to Thailand with Dara’s mother on her back.

“Like all wars,” Anne Sibley O’Brien replied, “the story is quite complicated.” As simply and as gently as she could, O’Brien spoke of the rise of the Khmer Rouge. Students gasped when O’Brien told them that 2 million Cambodians were lost before the conflict subsided. “You can see,” said O’Brien, “how even 35 years later, Lok Yeay could still be sad despite her wonderful life with her family in America.”

Talk turned to the celebration of the New Year and Canal School students agreed that they would like to compose New Year’s cards for Cambodian Americans celebrating at the temple in nearby Buxton, Maine. O’Brien led the students in a drawing lesson of the lotus flower, an important symbol in Cambodian culture and a frequent image in the New Year celebrations.

Students murmured as O’Brien showed them images of delicate pink lotus flowers blossoming on Cambodian bodies of water, on the grounds of the famous Cambodian temple Angkor Wat, and carved into the base of statues of the Buddha.

The students set to work drawing lotus blossoms on the front of greeting cards and tracing over the words “Happy New Year” written in Khmer on the top of their card. Third and fourth grade teachers, Mrs. Mains and Mrs. Pecoraro, encouraged their students to write their own message to their Cambodian neighbors inside the card.

One student wrote, “Cambodia is cool!” while others expressed their hope that their neighbors have a “fun day.” One student wrote, “Happy New Year Cambodia people and Uncle Whate.” It was librarian Susan Brown who translated with delight that “Uncle Whate” referred to the temple, Angkor Wat. Two students unbidden, drew Angkor Wat on their card and another stayed long after his fellow students had left so they he could handwrite “Happy New Year” in Khmer inside the card. He did this while talking about his favorite NBA teams and the basketball season.

“Having a such a diverse population as we do here at Canal, it is wonderful when we can come together and learn more about each others culture and background” said librarian Susan Brown of Canal School, “Students were very excited to think that someone they hadn’t met before would be able to see and read their New Year wishes!”

The greeting cards were created by Kirsten Cappy of the Portland business, Curious City: Where Kids & Books Meet, as a tool for schools and librarians to reach out to the community that the book featured.

“This summer a group of children’s book authors and I will begin an initiative called, ‘I’m Your Neighbor’, “said Kirsten Cappy of Curious City, “the project will create engagement tools like this to encourage the use of children’s books to build bridges between long-term communities and new arrivals. These New Year’s cards are just one way for the larger community to acknowledge an important time for their Cambodian neighbors.”

Anne Sibley O’Brien left Canal School to deliver the bundle of beautiful New Year’s greetings to her friend and collaborator on the book, Peng Kem. Mr. Kem planned to deliver the cards to his temple over the weekend. Then children’s book creator, Anne Sibley O’Brien hopped in her car to drive to Framingham, Massachusetts where 100 4th and 5th graders would create greetings of their own for their Cambodian neighbors the following day.