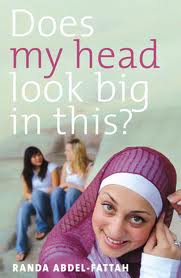 One of our favorite authors here at I’m Your Neighbor is Randa Abdel-Fattah. Her books Does My Head Look Big In This? and Ten Things I Hate About Me give terrific insight to the lives of teenage girls growing up Muslim in a Western society. Her characters face challenges as they try to balance their faith and culture with typical high school issues like dating, alcohol and social image.

Abdel-Fattah handles sensitive topics like the wearing of the hijab (the headscarf) excellently and readers walk away from her novels with a better understanding of Muslim culture. We highly recommend purchasing or borrowing one of her books, especially if you are interested in the viewpoints of characters of Muslim and Middle Eastern descent.

Abdel-Fattah’s bio for I’m Your Neighbor speaks to the change immigrant communities have brought all over the world and what she hopes her books achieve in breaking down the stereotypes perceived by those outside the culture.

School playgrounds are no longer mono-cultural. They’re melting pots of cultures, races and faiths. So how do teenagers from minority communities negotiate their existence and identity when they’re burdened by stereotypes and prejudices? And how do teenagers who don’t conform to popular culture’s so-called role models of beauty and lifestyle find the strength to be true to themselves? These are the kinds of questions I try to explore in Does My Head Look Big In This? and Ten Things I Hate About Me. Whether it’s Amal, who has decided to wear the hijab, or Timothy, who refuses to conform just to fit in with the popular crowd, or Simone, who wants to be thin, or Jamilah, who lives a double life to avoid people knowing about her background, I’m interested in the pressures teenagers have to cope with in trying to find their identity.

“Nappy-head”. “Towel-Head.” “Terrorist”. For Muslim teenage girls who wear the hijab, and are therefore immediately identifiable as Muslims, the main struggle is to live against the perception that you are oppressed or part of a threatening ‘other’. It’s exhausting to always be on the defensive, resisting a stereotype of victimhood, especially when you’re a teenager trying to figure out who you are! I wrote Does My Head Look Big In This? and Ten Things I Hate About Me because I wanted to explore characters who are really struggling to figure out who they are and fit in.  Some of them feel like they’re living in a zoo: locked in the cage of other people’s stereotypes, prejudices and judgments, on parade to be judged! Others want to be accepted for who they are, but can’t even accept themselves. Ultimately, my characters are learning that if they want the respect of others, they have to have self-respect first.