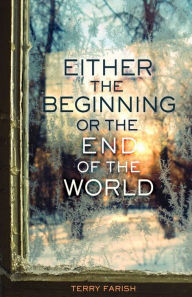 Either the Beginning or the End of the World delves into a horrific family memory carried over generations. The memory is of family members who starved to death during Cambodia’s Khmer Rouge genocide.

I’ve been on a long journey into Cambodian history and culture to begin to understand what this memory could mean to a young girl two generations later. The books I read and sources I interviewed tell a story themselves about my focus. It wasn’t on the wars, but on living after surviving them. I had read widely on wars in Southeast Asia since my early work in Vietnam for the Red Cross. The stories and history of those wars have shaped my interests as a writer.

I’ve been a public librarian and literacy program director, working with new Americans to promote family literacy in English. This work has kept me connected to many noncombatants affected by war, like some who had became my friends long ago in Vietnam. In the 1990s I worked at the Cambodian Mutual Assistance Association in Lowell, Massachusetts, teaching the Young Parent Class. My students were teenaged girls from Cambodia who had babies and needed support to continue their high school studies. Most of them had lived in the Khao I Dang camp in Thailand before coming to Lowell. Later, my family moved to a small New Hampshire town. New to the school, my daughter Lizzie became friends with a 13-year old girl from Cambodia. Her name was Ty. We became close to Ty. She loved rice and our house began to smell like Basmati rice! I include Ty’s memoir she wrote as a child in my reference list, My Trip to America.

Now my daughter’s grown, but I’ve continued to research Buddhism, Southeast Asian culture, and impact of war on families. Before I wrote Either the Beginning or the End of the World, I wrote a novel about a girl from South Sudan, The Good Braider. That novel ends in a place in which the young protagonist, Viola, is a determined girl, negotiating her mother’s strict African culture as well as the American one in which she lives. I leave her there, okay for the moment. But I know her journey is just beginning. A key resource to me was a therapist I met, Debra Lastoff, who works with Cambodian people struggling with the impact of the Khmer Rouge genocide decades after their escape from the war. She helped me understand about generational trauma and her work to help people with PTSD see themselves as survivors, to take the experience of the past “out of the dark, put it in the light.” This is the work of others I met in Lowell including Chhan Touch at the Metta Health Center and the writer Seng Ty who’s also a guidance counselor at Stoklosa Middle School.

While I was writing the novel I went to Chiang Mai Restaurant in Portland, run by a Cambodian couple. A story that runs through the novel is the myth of the rabbit in the moon, and I asked if they’d heard of this rabbit. The couple grounded the story in practical child raising. They said you point to the moon while you’re feeding your young child and say, Look, do you see the rabbit? You use the rabbit to make sure your child doesn’t fuss and eats up while he looks for the rabbit in the moon.

Cambodia
Cambodia Folk Stories from the Gatiloke, retold by Muriel Paskin Carrison, from a translations by The Venerable Kong Chhean, Tuttle, 1987.

Him, Chanrithy. When Broken Glass Floats: Growing Up Under the Khmer Rouge, Norton, 2001.

Ty, Seng. The Years of Zero: Coming of Age under the Khmer Rouge, 2013

Ung, Loung. Lucky Child: A Daughter of Cambodia Reunites with the Sister She Left Behind, Harper Collins, 2005

Finkel, David. “The Return: the traumatized veterans of Iraq and Afghanistan,” The New Yorker, Sept 9, 2013.

Gopal, Anand. No Good Men Among the Living, Metropolitan, 2014.

Three Hares Project www.endicott_studio.com/rdm/rrRabbits.html
by Terry Windling “The Symbolism of Rabbits and Hares”

3 Responses to “Cultural Research: Either the Beginning or the End of the World”